Yes!  Happy Halloween!  And to celebrate this most awesome of days, here are my pumpkin creations -- before and after . . .

. . . is your friend.  Repeat after me.  Criticism is your friend.  I'm talking those constructive notes from CPs, judges, editors, agents . . .  Most of them, even ones that might seem harsh (or are harsh) have something of value.  The ones who slam you, offer nothing constructive or useful and seem to be taking their crappy day out on you -- those can go in the trash.  Those only make you second guess yourself.  Anyway, the notes you receive could be something you already know, deep down, needs to be addressed.  It could be something you haven't thought of.  And it could totally go against everything you believe in where your book is concerned.  So what do you do when this happens?
Easy.
You listen.  To every single thing.  Even if, at first, it totally doesn't 'ring' with you.  Here's my rule of thumb -- if anything at all (even something as small as one word) pulls a reader out of my story to write a note, it's potentially something that could pull another reader out of my story.  So give every comment and note serious consideration.  Try to figure out why that particular thing stuck out.
Often times, I'll get notes that are spot on and sometimes I know immediately a note doesn't jive with the story I want to tell.  It could even make me bristle at first, but I have to take a moment and remember my rule -- there is a reason that particular thing caused the reader to stop reading, and I don't want another reader being pulled out of the story in the future.  In the end, I might not address the note the way the reader saw it, but I do give it time and thought, and usually I'll end up putting my own spin on things and amend the story in someway.  And there are times when I don't, but that is only after I give it a lot of consideration, look at things from all angles, and talk to the person who gave the note (most often great things come from discussions like this).
Posted by K. at 7:38 AM 3 comments:

Hee.  We have Spore.  'Tis very, very cool.  (And, yes, I know.  Yet another thing to distract me whilst I work).  But, it is Spore.  And it's very, very cool.  :D
We also had to upgrade our iMac Tiger to Leopard.  There's some cool new features, which I probably won't have time to explore because, um, we have Spore!!
Posted by K. at 6:30 AM 2 comments:

Yeah, so the mind is not working at full capacity.  Still feeling like crap-o-la.  This cold is being very stubborn . . .
But, some uplifting news.  I spoke with my editor today!  And may I just say, he is great!  Totally cool, down to earth and fun to talk to.  :D  We talked some about revisions, scheduling and working together.  All good stuff, people.
I'll be getting my edits soon and I can't wait to get back into the book.  It's been a while since I've read through it, so I'll be going in with fresh eyes and a new perspective.
Posted by K. at 12:30 PM 5 comments:

Sorry for the silence folks!  The ickies won't clear out of my system and I'm dragging my butt on just about every thing.  Laundry.  Reading email.  Blogging.  Writing.  Checking in with the rest of ya bloggers and journalers out there . . .
My mom is coming down for a visit this weekend and is staying through Halloween.  Should be fun.  But it means I'll have to tackle the chaos that is my house.  Gah.
Ooh, and I lost 10lbs so there is a plus to feeling blah.  Heh.
Posted by K. at 8:14 AM 2 comments:

Tales of a new author

For some reason, I find it vastly entertaining to read about how authors sold their first book.  So, if you're like me, here are two links that are equally interesting and inspiring.
Keli Gwyn's Romance Writers on the Journey
Scott Carter's The First Book
Posted by K. at 12:47 PM 2 comments:

Genre endings and the ride

Thinking a lot about this lately.  I expect happy endings in romance.  I expect the mystery to be solved in a mystery novel.  Or in a thriller -- the killer to be stopped.  In these genre books we all know what we're getting.  So what's the point in reading them if we know how it will end?  The journey!  The story, the twists and turns and the paths characters take to get to the end.
In urban fantasy or YA fantasy, we pretty much know at the end, the main character will triumph over evil or achieve her goal.  Sure, there might be other deeper or minor goals left unrealized (therefore carrying on the series), but in some ways we know what we're getting -- the main plot/goal to be attained.  We read for the ride, for the unexpected road the characters take.  And maybe the bad guy does get away.  It happens.  But the story is usually set-up so that the MC has achieved some victory that she's been trying for throughout the story.
I like books where the heroine does triumph at the end, but I really love a book when she has to give up something, or make unthinkable choices, or makes rash decisions based on emotion -- basically, I like when a MC acts human.  Fallible.  I want to tell her: no, don't do it!  And she doesn't listen.  She doesn't always think rationally.  She makes mistakes.  She isn't this hard, warrior who always wins a fight and makes all the right decisions.  What's the fun in that?
Posted by K. at 9:32 AM No comments:

I love the auto correct feature in Word.  I particularly like the fact that I can go in and list my own most commonly misspelled words and make Word correct them as I misspell them.  So words like:
Cahrlie - Charlie
seh - she
didn;t - didn't
brun - burn
herat - heart
So, whenever I do a spellcheck and notice a word that I consistently misspell (not b/c I can't spell, but b/c I'm typing so dang fast), I just make a note of the word and then go into auto correct and add it to my list.  Auto correct has its own list, but being able to add to it is an enormous time saver.  And my list is long.   Just thought I'd share.  :)
And thanks for the feel better wishes!
Posted by K. at 8:20 AM 3 comments:

The trouble with school age children -- they bring home germs.  And they give them to you.
Such was my night and day.  Been having that ache between my shoulder blades.  Feeling blah.  Throat is "off".   Hope this doesn't turn into something bad.  Gah.  'Tis the season!  :-/
Posted by K. at 12:19 PM 6 comments:

Okay, so y'all know about Spidericus Bigassicus, right?  Well, I now realize it's "Bigassica".  A female.   A female that has woven a nest full of little growing babies.  She hung it right against my kitchen window -- the one over the sink.  My daughter is thrilled by his development and has forbidden any removal of said nest, because she wants to witness their "birth".   Gah.  Not sure what to do.  Maybe I'll move it way out in the yard . . . 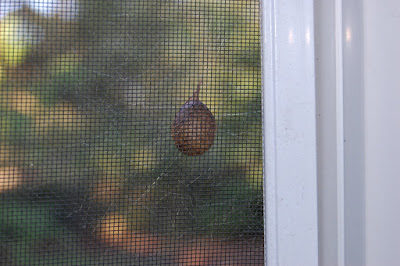 Tonight is the debut of Sanctuary!!  9 p.m.  Sci-Fi Channel.  I have high, high hopes here people!  The show is based on the fantastic web series, and the new website that Sci-Fi has done for the show is cool beans.
So, last night.  Vice-Presidential debate.   Couldn't watch it.  I know, bad American, but man I thought it was going to be a train wreck.  Glad to see today that it wasn't.  I have it recorded, so I'll watch it this weekend.  So, what did I do to avoid watching, hmm?  Painted my fingernails.  Now, I only paint my fingernails twice a year.  Once (french manicure) for Nationals.  And as soon as October comes, I paint them in honor of thee most awesome of holidays -- Halloween!  So, here's my handiwork.

Usually I write my rough drafts all the way through before going back to edit.  But, every so often, (okay, probably more than that) my brain refuses to cooperate and the muse refuses to lift a finger.  So, when it's clear nothing is coming and will not come even if I sit there and stare at the wall for 33 minutes, I go back and edit.  Don't really want to edit.  In fact, I'd rather sit on the couch, stuff my face with chocolate chip cookie dough, and watch History International until inspiration hits me.
But, alas, when the big engine fails, the fail-safe kicks in and keeps the machine rolling.  Yeah, I'm not actually moving forward when it comes to the the rough draft, but I am fixing things and making my job easier and shorter down the road.  Things is, usually, when I go back and edit, I find my voice and words again -- so this little trick usually does the, er, trick.  Heh.
So what do you guys do when the words won't come?
Posted by K. at 2:29 PM 6 comments:

So, part of secret project is to research word/slang usage in a certain period of history.  Namely, cuss words.  I didn't expect this to be so fun.  But, damn, it is.  Here's a little gem for your reading pleasure -- especially helpful for all you writers out there:  Expletive Deleted:  A Good Look at Bad Language by Ruth Wajnryb.
WARNING:  For all you folks out there who don't use the F word or like to read about the F word, then please read no further.
This little yellow book is hysterical.  The author goes through several bad, bad words -- their history, usage, the way that they've evolved over hundreds of years.  It's really fascinating.  But what makes this little book a gem for me is the caption under each chapter heading.  The author takes a famous person in history and gives them a quote of what they might have said using the F word.  I don't have the book in front of me, but they go something like this:
Michaelangelo:  "You want what on the fucking ceiling?"
Elizabeth I:  "Heads are gonna fucking roll."
Picasso:  "Fuck you.  It does too look like her."
I've been coming up with some of my own, too . . .  "Houston, we have a big fucking problem." Kind of a fun way to let your mind wander when it should be focusing on other things.
Posted by K. at 9:48 AM 3 comments: