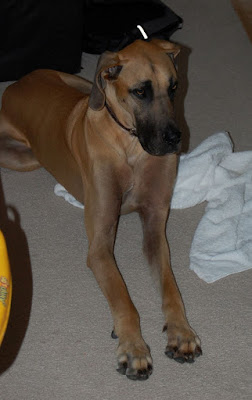 You name it, and I am it. :-( I think I'm still in shock a little, too. Yesterday, my 2 yr old Great Dane, Yeager suddenly screamed while outside. I mean screamed. For 4-5 minutes straight. He was holding his paw up and limped into the house where he plopped down on the floor and continued to whimper. Everytime he shifted or stood up, he would yelp. I was pretty sure he'd fractured his left front leg/paw. So I took him to the emergency vet who has an ortho doc on staff.

He is terrified of the vet, so when we got there he was shaking and it took three vet techs to lift him out of the back of my SUV. But, good news was, he walked into the hospital and was not limping at all (we believed this was due to adrenaline taking over and masking the pain).
So very long day and story short: he does not have a fracture or anything else wrong. It's much worse. He has a degenerative spinal disease. His vertebra in his neck are growing more bone, squeezing his spinal cord and blocking/pinching his nerves (particularly the one that goes to his left leg).
He needs an MRI and surgery. BUT surgery could also end up paralyzing him and making him worse. OR it could cure him. OR it could relieve the pressure for a few years until the bone starts closing in again. I don't know what to do. While he is young and healthy and a good candidate for surgery, he is also incredibly sensistive, and I think surgery would take an enormous toll on him that he might not fully recover from. Yesterday (after going through general anesthesia -- tube down his throat-- so they could take all kinds of tests and X-rays, he had a very difficult time coming out of it. Once he was well enough to go home, he still was having a hard time. I couldn't get him out of the car. He was crying and shaking and kept collapsing when he tried to sit up. He had to stay in the back of the truck for 3 hours, before he was well enough to get out, and once he didn, he immediately collapsed in the driveway and we had to sit there for another 15-20 minutes before he could stand again.
He cried all night.
If he had surgery, he have to be in a sling b/c he wouldn't be able to walk unassisted for a while. His neck would be in a brace. How the hell am I going to lift a 120lb Great Dane in a sling? The only other option is not having the surgery and hope that the disease progresses slowly and we would manage the episodes of pain with medication. The thing is, right now, he is happy, otherwise healthy, and is always in good spirits (minus the vet thing). So, I'm afraid surgery will do worse than good. But then I'm afraid of letting it get any worse... Ugh!!! I'm going to talk to the vet again today about options and alternative treatments and outcomes...
Today he is doing great, and he seems to be pain free for now -- until he moves a certain, random way and that nerve gets squeezed . . .

Here he is with his Christmas present: 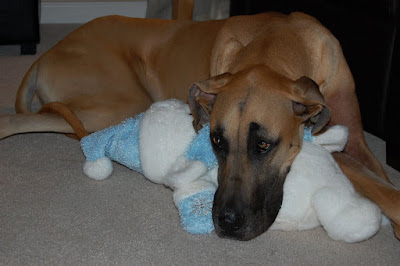 And as a pup before going to my daughter's soccer game: 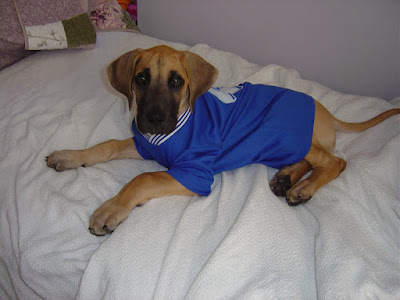 Dear Kelly,
I haven't been following your blog long, so you don't know me. I am a writer in Upstate NY with 6 decades of experience with animal friends. This is one of the hardest things to go through. What to do, what to do. This may sound crazy, but after you collect all the scientific and medical data, and consult a doggy chiropractor (there are such people and they work) then ask your dog what he wants to do, Go or Stay? He can tell you with pictures in your head. If you can't do that, there are animal intuitives who can, but I am pretty sure anyone who loves an animal can do this for themselves out of pure love. Blessings and courage.

And one more crazy statement--many many of my animal babies have returned in spirit or reincarnated in another pet. No matter what, this is not the end for you and the dog. Dorothy Abrams

Kelly, I know what you're going through. My two Sphynx cats were diagnosed with HCM (a heart disease) this year and I thought I was going to die. Wait, no it was last year. We are treating with pills, but there is really no way to tell how long they'll make it. SO I just treasure every day.

You've got hard choices coming up and I feel for you, I am so sorry. You need anything, let me know.

Thanks so much for posting with your kind and insightful words, Dorothy. I really appreciate it! :-)

Big thanks, JKB. Sorry to hear about your cats, but glad to know that they are making it one day at a time and have a loving home!

Big hugs to you. I am sorry to hear about your dog suffering. It's always tough but I know you'll make the right decision. You know where I'll be if you need a friend!

I'm ready to cry about your puppy. I'm so sorry. If anything like that happened to any of our cats, I'd not only go to pieces but I don't think my daughter would recover.

Oh Kelly my heart just breaks for you. I've gone to extreme measures to save various pets. Sometimes it's panned out, sometimes, in hindsight, I probably just prolonged their suffering. I believe as long as you fulfill your end of the bargain and proceed with love, and be there for him no matter which path you choose, you'll have done right by him. I really think animals are here to lead us to our humane selves.

It's always devastating to let them go, but that's always in the fine print of our contracts with them.
: / Really sorry for you hon.

Kelly, I'm so sorry to hear about that. *HUGS*

POOR YEAGER!!! :( It's a tough call. A very tough call. I'm glad you're going to talk to your vet again. I think whatever you do, as long as it's out of love Yeager will be happy. That's all dogs really care about, being loved.

Thanks so much you guys! ((hugs)) I really appreciate the kinds words and wishes for Yeager.

Oh, hon. I'm so sorry! You know your friends will support whatever your decision is. It's sometimes so hard to take care of an animal with a chronic and debilitating illness, especially one that causes him such pain. I lost my little five year old cat BJ from pancreatic cancer twenty years ago. She went through six months of chemo and it gave her one really good extra year. I wouldn't trade that year for anything.