Bring on the Okra...

The BETTER PART OF DARKNESS is an Okra Pick!

"Summer is winding down and the harvest is coming in and Southern Indie Booksellers have a selected a basket full of books for the Fall 2009 Okra Picks. Thirteen books made the final list, and include fiction, nonfiction, poetry, children’s and young adult titles. All the books have the following things in common: 1) They are Southern in nature. 2) They are Fall 2009 releases and 3) There is a SIBA member Bookstore who is really excited about this book. Southern booksellers love their Southern authors!"

I'm stunned by this, stunned and incredibly pleased -- okay, beaming like a proud Momma is probably more accurate. It's such a great honor to have the book recognized by SIBA, and to be chosen out of the number of southern titles releasing this fall across all areas of fiction. And besides being picked, I'm totally excited that a sci-fi/fantasy genre book was included in the mix of fall titles! Gooooo urban fantasy!

Win a critique of your work!

Since a lot of you who visit me here are writers... The fabulous C.J. Redwine is offering an amazing contest over at her blog The Last Word. And she has the most amazing way to enter. Here's a bit from her blog:

Are you an aspiring writer who needs a professional critique of your work? Are you entering the Golden Heart and need a critique of your contest entry? Do you enjoy bragging rights and the thought of taking on Twilight and shaping it to your own nefarious, er, I mean creative purposes? Then this is the contest for you!

Rules:1. Take the first sentence of Twilight (below) and use it as the beginning of a 500 word piece of writing. Hook the reader with humor, drama, suspense, or beautiful prose! I don't care if you stick with the vampire plot from Twilight or take us in a totally different direction.

So get on over there and enter! I'm gonna go read the entries -- can't wait to see what people come up with!
Posted by K. at 8:50 AM No comments:

Cool little discovery this morning over at Eclectic Book Lover.
Posted by K. at 8:55 AM No comments:

Labels: The Better Part of Darkness

Definitely a Monday. Just getting started on things I usually do in the morning. Oy.

For those who asked/pointed out (and thank you, btw) that they couldn't find my book or my author profile on Simon & Schuster.com, I am now listed. Content will eventually fill out the page in the next coming weeks or so...

The Eclectic Book Lover will be posting an interview with Yours Truly this Wednesday wherein I talk about The Better Part of Darkness and some things you might not know about me. :-)
Posted by K. at 3:06 PM No comments: 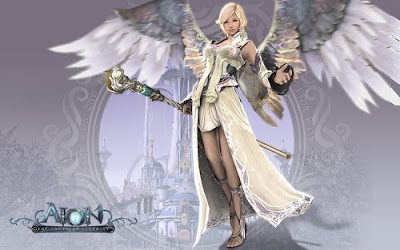 I am happy this weekend. Aion is out!! It's a new -- incredibly gorgeous -- MMORPG game. I pre-ordered so I've been able to get on and fiddle with character creation, and holy cow, the options are staggering. I have played a lot of RPG's in my time, but this one, the ability to create and mold your character is truly exceptional.

Aion is also mirrors the whole mythos of heaven and hell - very loosely, but hey when you've got divine flying beings with angel wings... Awesome! And with my love of biblical myth ala The Better Part of Darkness, it's a no brainer that I'd be drawn to this game. I've been waiting for this for over a year now. YAY!! 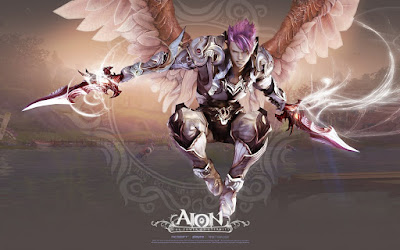 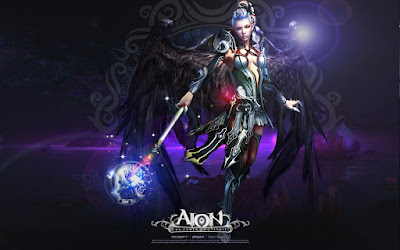 I think I've figured out the whole 'What To Work on Next' thing. :-) I was inspired, so I'm starting the first chapter of the third Charlie Madigan book. I also have a really awesome stand alone novel that's been stewing in my head for a while, so I might work on that too. And as many of you know, I usually work on two projects at once, so that's right in line with How Kelly Does Things. :D

As for the week ahead, I'll be writing and working on contest entries I'm judging and a guest blog post.

Today there is a new review up for The Better Part of Darkness at Tez Says. I'm stoked that she mentioned some of my favorite characters and the world building -- as world building is a big, big love of mine!

And next week (the 23rd, I believe) there'll be an interview with me up at Jacqueline's great book review blog: The Eclectic Book Lover. She had the neatest questions, and I had a lot of fun answering them.
Posted by K. at 12:19 PM 1 comment:

I have some. Who knew? I'm suddenly like a baseball player before a game. My little quirks have changed since becoming published. Before selling, when I'd send out queries and partials, I had a very time consuming habit of reading over each query, each partial sent to each individual agent. Didn't matter if the document was identical. I had to read it over each time it was sent. Period.

These days, especially now that I have turned in Charlie Madigan's Book 2, the last book in my contract, and have completed my super secret YA, I'm in a holding pattern. Self-imposed holding pattern, but still. I've written a synopsis for Charlie's Book 3, and one for the second book in the YA series. But I can't seem to sit down and start writing either of these books. It would be unlucky, you see. I don't know if the YA will eventually sell, so starting the second book might be jumping the gun -- therefore unlucky. Same goes for Charlie's Book 3. I don't know yet if my publisher will want more books, so forging ahead, well, it could be a really good use of time or it might not be the best use of my time right now. Hmm.

When did I develop this crazy superstition? That it would be bad luck to start on further series books when I don't even know if they're wanted. Dunno. It's a time management thing, I think. But, it's also crazy because every aspiring writer out there faces writing a novel not knowing whether it will sell -- just hoping to hell that it does, me included. But what about additional books in series? I know a few authors who wrote additional series books before selling the first. And I know authors who wrote the first and then waited to see if it was something that would sell before continuing with that particular storyline.

I'm rambling, but I guess what I'm trying to work out is what to work on next. More in Charlie's world? More in my YA? Or something entirely new just to keep me writing until I know how the 'Books-in-Waiting' will fare?

All I know is that I need to keep writing. What about you guys? Any superstitions out there?
Posted by K. at 8:12 AM 4 comments:

Or you could call it Ilona's Revenge (on Meljean Brook, that is). 'Tis hysterical. And Odd Shots is a pretty cool blog with some amazingly talented authors, so check it out.
Posted by K. at 10:42 AM No comments:

So, I couldn't resist the lure any longer. :D And, honestly, it feels a little weird to be pimp- *cough, cough*- promoting my book everywhere. But, I really want people to know about Charlie Madigan! To one day read her story, to take a little vacation to Underground Atlanta and see what happens when myths and legends come out of the closet.

It's been a very relaxing week here at Casa Kelly. I've been addressing my enormous To Do list, and have crossed off several pending things such as:

4) pimping some much anticipated books

6) updating my website (and researching designers to create a snazzy new look).

7) judging a few entries in a writing contest

8) thinking up a series name for Charlie's books

10) working on a few guest posts

That's just off the top of my head. And why would I refer to all that as 'relaxing', you might wonder? Well, I'm a list person. I get great satisfaction by crossing things off. Makes me feel like I'm still accomplishing things and moving forward. And Book 2 has been turned in, so, by default, anything else I do is relaxing! That was one hard book to write! ;-)
Posted by K. at 2:34 PM 2 comments:

Today marks the official release of fellow Pixie Chick, Annette McCleave's debut paranormal romance, Drawn into Darkness!
Make sure to check it out. It's getting great reviews!!