In honor of the Southern Indie Booksellers Okra Pick and because I'm way past the time when I intended to do another contest, I present to you a themed contest. Oh yeah. It's haiku time. Here are the rules:

2) Your imaginative (funny, serious, angry, whatever) haiku -- three lines only, which must have some relevance/semblance of a southern or paranormal nature. Or both. Some examples of haiku can be found here.

Hard, you say? It'll be worth it. The winner will receive four urban fantasy novels, all set in the south as well as a coverflat of my debut novel. We have THE ACCIDENTAL DEMON SLAYER by Angie Fox, A RUSH OF WINGS by Adrian Phoenix, MARK OF THE DEMON by Diana Rowland & an ARC of THE BETTER PART OF DARKNESS by Moi. 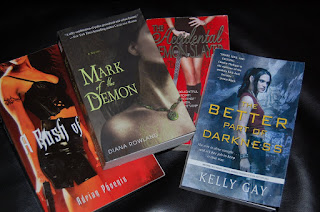 My entry:
I saw in the night
Dark eyes gleaming with hunger
and blood on his lips

Witches, Vamps and Weres
Lurk inside my computer
Y'all come over

(Found you thanks to Ann Aguirre on Twitter, BTW--writing an urban fantasy myself, will have to check yours out. Good luck with it!)

Urban fantasy-
Where badass heroines fight
Creatures of the night

Bumps in the night no longer
Scare me, it's just
My honey, coming home.

Came thanks to Ann too :)
Oh haiku, hard.

Zombie say I brain
Be gone, I call a were now
Limb, brain, blood, not here

My turn, my turn!

Ash swirls on the breeze.
The hunter in the alley
Needs a new boyfriend.

Southern fried okra
is all the rage, but give me
a taste of Ms. Gay

JC Hays I love yours!

A vampire fights
ghosts in the summer night heat,
he drawls "y'all're dead."

Witches, vamps, and weres
Oh my! We're not in Kansas
Anymore, Todo.

Here it goes...my first one LOL

Sink your fangs into
tasty Southern belles, vampires -
red necks are your trade.

Okay, so it's kind of a downer, but I like writing dark sometimes. :) *muahaha*

Oh wow, a lot of great haikus here. But the Southern girl in me couldn't resist the challenge. Here's my offering:

Depending on your accent, the last line could be messed up; but where I come from it works. *grin*

Southern vampires sip
Their blood with gallons of sweet tea.
Y'all come back now, y'hear?

I've never done this before, so I'm not sure how well I'll do, but I'll give it a try:

The spanish moss hangs
from the trees as the
zombie climbs from the grave.

Magnolia blooms
no whiter than gleaming fangs
of my vampire love.

Even my dog has
a drinking buddy in wild
genteel Savannah

Don't know if im doing it right, but here it goes...

can't wait to read your book :)

Walking with a vampire
in the woods
Where's my True Blood?

Thanks for the contest!

Here's mine! It was fun! Thanks for the giveaway!

kelly, its heath from high school...

drop me a line

I just finished The Better Part of Darkness tonight and loved it! I should have a review posted on my blog soon - I'll send you the link once it's up :)

shadows on the moon
floating down, they stalk fresh prey
nothing left but bones

Slash, blood spills forth
He licks his lips in hunger
Pleasure will be his