Sunday Jenna Black and I attended an author chat at East Regional Library in Knightdale, NC. This was my first 'chat'. And this was my first ever 'reading'. Sure, I've read my stuff aloud before. But never in front of others. Never in front of strangers. Never with all eyes and ears on me. Nervous doesn't even begin to cover it, but once all was said and done, the event went over nicely and I didn't turn red or otherwise embarrass myself. I think. :-)

Anyway, the most excellet Janet Morley hosted us and she was truly awesome. She devised a paranormal theme complete with garlic dip and some type of death-by-chocolate cake that was sooo yummy. The room was pretty cool, too. Check out the lights. (That's a blurry Jenna in the background.) 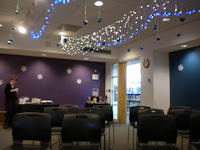 It was a great venue for a first-timer. Much thanks to Janet and the folks who attended!
And because the library had a life-sized cut-out of Edward Cullen, I could not help myself. I had . . . to get . . . a closer look... 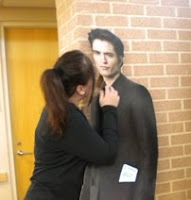 Edward tried to act like he wasn't interested, but he couldn't fool me.
And then I had Jen and Janet pose with the happy couple:

Fun was had by all. And Jen will probably never get near me and a cardboard cut out again. ;-) But, hey, it's fun to not take yourself too seriously all the time, ya know?
Posted by K. at 11:21 AM

If only you were closer to where I live you could "not take yourself seriously" more often! I love to see people having innocent fun and doing things outside the box like this, it makes life more interesting for all of us. Thanks for sharing Kelly and you made me smile! BTW do not lose that sense of adventurous humor and fun because that is what also helps you take chances in your writing I think!

Look with your EYES, Kel! ;-) You deserve so much better than Edward, though.

Thanks, Jackie. Your package is enroute, by the way. ;-)

LOL, Tez. And thank you. Funny thing is, I liked the books, but I'm not a huge fan either way of the actors and such... But I saw that cut-out and *had* to pose. :D

Nothing wrong with posing for a picture next to a cute boy, Kelly.

I'm so glad your reading and chat went well... another hurdle that you've gone over!

Thanks Corrie! Yeah, I'm glad that hurdle is over. It'll def. be easier next time. :)