Heh. Yes, I actually remember getting those notes and writing them, complete with the check boxes. Things were so simple back then... :-)

Just another of my quickies here to let you guys know that I have a new FB page for my YA alter ego: Kelly Keaton. Got some cool pics that inspired me while I wrote DARKNESS BECOMES HER, and interview excerpts in the discussion area. Going to use this page to talk YA stuff, and to post updates. Please take a look and 'Like' me, er if you'd like. ;-)

Also finishing up galleys and then working on some new material today...
Posted by K. at 9:35 AM 6 comments:

Just a quickie since I'm knee deep in edits... I'm guest blogging today over at Mayhem & Magic. The subject is creating 'chilling plots'. Please stop by and say hello! :)
Posted by K. at 11:52 AM No comments:

I might be a bit scarce in the next week or so. Depends on how much I get done. Get what done, you ask? That would be Young Adults copy edits that came yesterday and DEOD galleys that are arriving tomorrow. ::crazy eyes:: Heh.

I'll try to take some non-spoilery pics to show you guys what they look like, and the differences between them.

Getting a jump right now on the YA, and it's going smoothly, so I should be able to get both done without too much trouble, she says optimistically.
Posted by K. at 2:47 PM No comments:

Labels: copy edits, galleys, The Darkest Edge of Dawn, YA

EDITED TO ADD: Yesterday evening I learned that the woman is in the hospital, still in and out of consciousness. Her kids are staying with their aunt, so sounds like everyone is being looked after... Here's hoping everything turns out OK!

Not sure where to start, only that my mind is on overdrive and I can't stop thinking about this morning. The first time in my life I called 911. Not sure I have ever been so scared or at a loss before either.

I took Kid #1 to school this morning and noticed an SUV parked near an intersection in my neighborhood. This is nothing new as this is a bus stop and parents often park on the curb to wait with their kids. Never saw this vehicle there before though, and as I drove past, I saw that the driver, a woman had her head down as though looking at something in her lap and there were kids in the back seat. I thought a cell phone or something. The way her head was bowed struck me as odd, but I kept driving, dropped off my daughter at school (2 miles away) and then drove back into the neighborhood.

The car was still there, and as I passed, I saw that the woman's head was still bowed. It wasn't right. I knew it. I stopped in the middle of the road and sat there for a second, looking in my rear view mirror. I'm not nosey. I mind my own business. I don't like to get involved. I mean, what if she was just texting or something? But I sat there thinking she might be in trouble. The way her head was bowed. It was too odd. Too...inanimate. What if she is in trouble? Then I thought, if that was me, I'd want someone to help me.

So, I put the car in reverse and parked on the curb in front of her car and got out, leaving my son in the car seat and telling him I'd be right back. As I walked up to the car, I started shaking. Her car was still running. There were two little girls I could see climbing around out of their seats. I unclip my cell. The way her head was bowed... Was. Not. Right. When I got to her window I saw she was out. Pale. Sweaty. It crossed my mind that she might be gone. I knocked on her window. Nothing. No response. I called 911.

For a second, I didn't know what to say to the operator, or where I was standing. I floundered, but then glanced up at the road signs and just repeated, told them there was a woman in a running vehicle passed out with two kids in the back.

Then I hung up. I kept thinking what if she is dying? What do I do? What do I do?! My legs were trembling so bad. I went around to the passenger side, took a deep breath, and tried the door. It opened. The woman looked the same from the other side -- no wounds or blood. The girls, I guess between 3-5 had been going through their mom's purse, putting on her make-up and had lipstick on. I put on my friendly Mommy voice, said hello to them, told them it was okay. I called out to the mom. Nothing. I asked them what had happened to their mom. They told me she was "sleeping."

I ran back to her side, opened her door, and shook her shoulder, calling out to her, and wondering why the police weren't there yet. Finally, she lifted her head just a fraction, her eyes came open, rolled, and then she passed out again. All I could think was THANK GOD, she is alive. Then, I started wondering what I should do keep her that way, but just then two police cars flew passed the intersection and didn't see us. I ran into the intersection, behind them waving my arms. I called 911 again (and I'll admit I was a tiny bit panicking at this point). The operator said she'd tell them to turn around.

I ran back to the car and told her and her kids that it would be okay, that someone was coming to help. I have no idea if she could hear me or not. I told the girls that Mommy was going to be okay, and then the police were there, like a swarm. Four of them. I have no idea what I said, but I stepped back, went to check on my son, got him out of the car and held him. And waited. Legs still shaking and trying not to cry.

They talked to her. She lifted her head once and then was out cold again. Two of the other officers got the girls back into their seats, gave them teddy bears, and the ambulance was on its way. One of the offcers ask me a few questions, took down my info, and then I left.

And now I'm home, and I keep tearing up. I keep wondering if she'll be okay. And I can't help but think about if I kept driving. If I'd passed by like a ton of other cars did (and as I did the first time by), what would have happened to her in that car? I think she knew she was in trouble, because she had the sense to pull against the curb and put the car in park.

Anyway, that was my morning. And I can't stop thinking about her, how precious life is, and how one single moment can change everything. :-/
Posted by K. at 9:26 AM 16 comments:

Feel like I've lost track of things this month. Of the writing and blogging. Like, good, meaty content, ya know? The last two weeks I've mostly been:

All this has thrown me off my usual writing routine a bit. But, as some of you already know, I did begin writing a new Charlie Madigan scene that got stuck in my head and had to be written. This scene involves the mention and subsequent creation (on my part) of a an eerie mythical creature that I totally dig, for it's creepy and dark and soooooo lethal. ;-)

I love connecting with readers and networking, organizing, and getting fab-o news. But, man, when the creation bulb sparks that is when I love my job the most. That's when I'm in my element and doing what I'm meant to do. So, yay for the scary creatures! I'm off to write...

Labels: promo, The Darkest Edge of Dawn, writing, YA

Book I want to read! 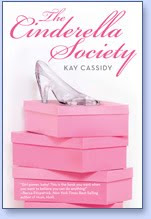 Kay Cassidy's YA debuts today! Kay is a friend and a fabulous writer, so I cannot wait to read her book. And she's getting great buzz, too. Becca Fitzpatrick New York Times bestselling author of Hush, Hush says: "Girl power, baby! This is the book you want when you want to believe you can do anything!"

Heading out today to get my copy! I love a good uplifting YA yarn, and how can you resist a book where the two oppossing factions are called the Cindys and the Wickeds? So cool. ;-)
Posted by K. at 10:13 AM No comments:

Yay! So kellygay.net has moved to www.kellygay.com. New address and fantastic new site designed by Atomic Cherry and inspired by the artwork of Chris McGrath. Really happy with how it turned out! Go take a look and let me know what you think, and if you spot any issues or errors, please let me know. Thanks!
Posted by K. at 6:57 AM 9 comments:

Earthly Charms designed the bookmarks for BPOD and DEOD. Love them! They also did amazing postcards, too. The front is the actual cover and the back is pictured below. As soon as my website goes live, which should be today or tomorrow, there'll be a contact form available for anyone who'd like one (or more if you're requesting for a bookstore or reading group). I'll be moving to kellygay.com, but my old site will redirect once the new one is up. But until then, aren't they pretty? 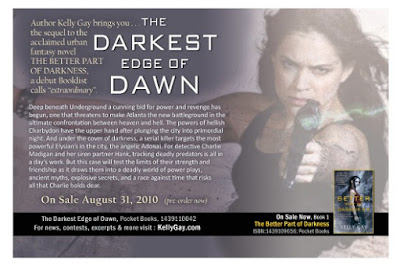 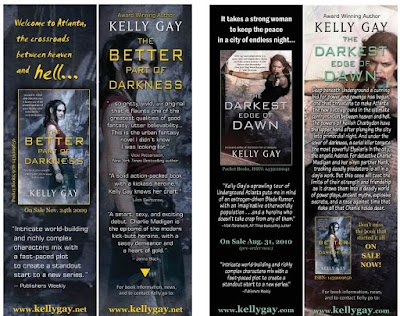 My Sunday started early. Made BBQ chicken salad, brown sugar wedding balls, and a layered concotion of granola, yogurt, and fresh fruit to take (along with two bottles of champagne for mimosas) to our friends house.

Tripped over my son's animal book and smashed it into the corner of the ottoman. It was the kind of pain that knocked the breath out of me for a few seconds. It swelled, turned purple, and burned like crazy.

In the end, though, we still made it to our friend's house and had a lot of fun. Once we made it back home (to a kitchen full of dishes), the dishwasher broke. *sigh* I'm talking full of dirty dishes and then all my dirty ones from cooking and the day before. Which now need handwashing. But, good news is there's a new dishwasher expected on Wednesday and said 'little digit' is nestled in tape and healing quite nicely.

How was everyone's Easter holiday?
Posted by K. at 1:02 PM 7 comments:

It's a caffeinated miracle

I don't know what's weirder: The 'K' in my coffee cup this morning or the fact that I had to take a picture of it. :-) Behold I present to you this amazing phenomenom: 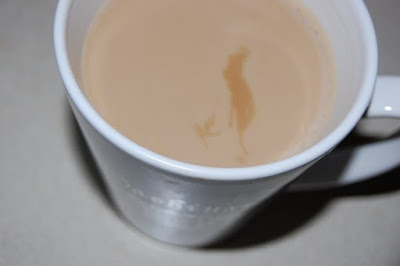