Last Stop on the DBH Blog Tour is HUGE!

Okay... Get ready for it... My last stop on the DARKNESS BECOMES HER blog tour is here. We've got a massive giveaway!

Grand Prize (One Winner only) will receive:

Awesome, right? Make sure to stop by Once Upon a Twilight to read the post and learn how to enter!!
Posted by K. at 9:21 AM 2 comments:

Labels: contest, darkness becomes her, YA

DARKNESS BECOMES HER is out today!

So happy the day is finally here! Just got a fabulous new review from Night Owl Romance as well. Top Pick!! Thanks Leslee!

This book is my first Young Adult (as most of you know, LOL). It's got a heavy urban fantasy influence, a strong female lead, is slightly post-apocalyptic, a little dystopian, paranormal... It's a bit outside the box, but I like to think of it as a very twisted Clash of the Titans for teens set in a hauntingly re-imagined New Orleans. Hope you'll check it out! 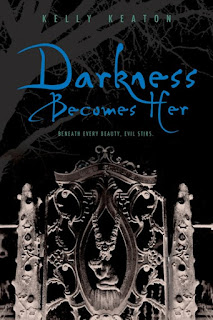 "Darkness Becomes Her is part “Lightning Thief,” part “Twilight,” and part “Maximum Ride.” [It] will leave many readers clamoring for the next installment."--SLJ

Ari can’t help feeling lost and alone. With teal eyes and freakish silver hair that can’t be changed or destroyed, Ari has always stood out. And after growing up in foster care, she longs for some understanding of where she came from and who she is.

Her search for answers uncovers just one message from her long dead mother: Run. Ari can sense that someone, or something, is getting closer than they should. But it’s impossible to protect herself when she doesn’t know what she’s running from or why she is being pursued.

She knows only one thing: she must return to her birthplace of New 2, the lush rebuilt city of New Orleans. Upon arriving, she discovers that New 2 is very...different. Here, Ari is seemingly normal. But every creature she encounters, no matter how deadly or horrifying, is afraid of her.

Ari won’t stop until she knows why. But some truths are too haunting, too terrifying, to ever be revealed.

DBH at Amazon
DBH at B&N
DBH at IndieBound

Labels: darkness becomes her, YA

BLOG TOUR STARTS TODAY!! So excited. It's hosted by Once Upon A Twilight and the first stop is at Larissa's Bookish Life. Both awesome blogs and run by awesome ladies! :D I'm talking about the gods (mainly a certian Greek goddess) & giving away a SIGNED copy of DARKNESS BECOMES HER and swag!

Hope you can stop by! And to follow the tour with us for more chances to win:

Labels: contest, darkness becomes her, YA 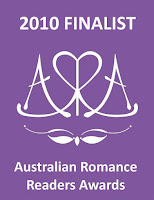 Deadlines are stalking me and I have been on the run and hiding for a long time now. Heh. Yeah, it's true. Anyway, an update is in order!

I'm incredibly pleased to announce that THE DARKEST EDGE OF DAWN has been nominated for an ARR Award! Totally amazed and grateful to the folks who voted for the book. The company DEOD finds itself in is humbling! Big, big thanks to my readers and friends Down Under!! (You can click on the pic to see the finalists.)

And in other news: 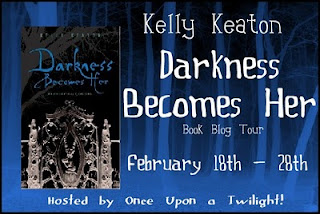 Labels: darkness becomes her, The Darkest Edge of Dawn, The Hour of Dust and Ashes, YA
Newer Posts Older Posts Home
Subscribe to: Posts (Atom)