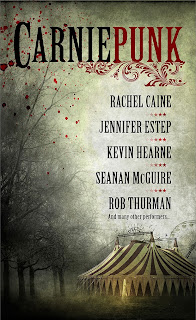 Rachel Caine is the New York Times bestselling author of the Morganville Vampires series, the Weather Warden series, the Outcast Season series, and the new Revivalist series!
Delilah S. Dawson is an artist and an associate editor on CoolMomPicks.com. She lives with her family in Atlanta, where she is currently writing the next Blud novel.
Jennifer Estep is the New York Times bestselling author of the Elemental Assassin urban fantasy series for Pocket Books and also writes the Mythos Academy young adult series.
Kelly Gay is the author of an urban fantasy series featuring Charlie Madigan. A two-time RITA Award finalist, she resides in North Carolina.
Mark Henry is an adult urban fantasist, comedic horror writer and unrepentant smart-ass. His work has been translated into garbled slurs by notable alcoholics. He lives on the fringe of Seattle society with his saintly wife and assorted hairy monsters.
Hillary Jacques is an up-late, Alaska-based author of speculative fiction. Her romantic urban fantasy Night Runner series is published under pen name Regan Summers.
Jackie Kessler writes about demons, angels, superheroes, supervillains, and, in her semi-secret identity as a YA author, Riders of the Apocalypse. She lives near Albany, NY, with her Loving Husband and Precious Little Tax Deductions.
Seanan McGuire is the New York Times bestselling author of the InCryptid series and the October Daye series, which earned her the John W Campbell Award for Best New Writer in 2010. The Newsflesh trilogy, published under the pseudonym Mira Grant, earned her the Hugo Award for Best Novel in 2011.
Kelly Meding was born and raised in Southern Delaware and discovered Freddy Krueger at a very young age, and has since had a lifelong obsession with horror, science fiction, and fantasy. She writes the Dreg City urban fantasy series and the superhero-based MetaWars series.
Allison Pang, a biologist in a former life, spends her days in northern Virginia working as a cube grunt and her nights waiting on her kids and cats, punctuated by an occasional husbandly serenade. Sometimes she even manages to write. Mostly she just makes it up as she goes. She loves Hello Kitty, sparkly shoes, and gorgeous violinists.
Nicole D. Peeler resides outside Pittsburgh to teach in Seton Hill’s MFA in Popular Fiction. When she’s not in the classroom infecting young minds with her madness, she’s writing manga and the Jane True urban fantasy series.
Rob Thurman is the New York Times bestselling author of the supernatural thriller All Seeing Eye, the gritty urban fantasy Cal Leandros series, the Trickster Novels, and standalone thriller-suspense novels.
Jaye Wells is a USA Today-bestselling author of urban fantasy novels about magical vampires and junky wizards. She loves to travel, drink bourbon and do things that scare her. Jaye lives in Texas.
Posted by K. at 12:10 PM 4 comments:

Well, for a while now I have been wondering what to do with my poor neglected blog. There is a lot of content here, a lot of good stuff on writing, query letters, the business, etc... I've had this blog before I sold my first book, before I got an agent even, hell before I even wrote the book that sold (my first Charlie Madigan book). I'm thinking a redesign, something to spice things up and get me back into the swing of blogging once again. I mean, I still have things to say after all, work stuff, writing stuff, views on the biz, and the usual weirdness like Xena and Barbie doll fight pics (those bitches are still fighting over Legolas. It never ends).

A new year is coming, time for a nice revitalization of ma blog me thinks. ;)